Westside film & television have begun shooting their new kids series, Snake Tales.
Snake Tales follows a group of unlikely kids that find themselves marooned together in a remote reptile park in the middle of nowhere. Chroma designed and produced the opening titles presented in a cartoon, 3D style.
In addition to titles, various exterior VFX shots of the 'Snake World' park were created using HD background plates, with a high detail CG model of the set added using camera tracking. Chroma will be producing a wide variety of effects work over the entire series, which is being posted in-house at our Violent Panda facility.
Snake Tales is coming to the Nine Network later this year. 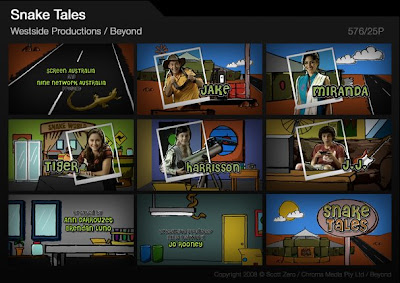