Hot on the heels of Rush's second series comes Southern Star's next big drama production, Tangle.
Staring Ben Mendelsohn, Justine Clark and Kat Stewart, the ten-part drama presents modern parents and teenagers struggling with the morals of living in the 21st Century and with each other. The series also has long-time Chroma patron, Matthew Saville directing. We have been producing several VFX shots for the show mainly focused on complex stunt rig removal and technical corrections.
Tangle is set to hit Australian screens in the coming months on Showtime.
___________________________________________ CHROMAMEDIA
> tv, vfx

Each series of NEWStopia gets better with what is now one of the best comedy teams in recent years. We returned to again provide visual effects and graphics support for the third season which aired late last year.

The crowning achievement, however, must be the final show of the series which took the form of a full-length INSPEKTOR HERRING episode. All of the NEWStopia cast are there and are easy to watch as always, but it's Nicolas Bell that really shines as Comrade Beluga. The entire 'film' was shot and produced in only 1 week and involved us producing over 20 VFX shots and performing grading duties to give it a strong eastern-european feel.

One of the best things about the show is the ability to hear the viewers feedback and encouragement on the NEWStopia website as the series is airing. When your slaving away in the dark recesses of post production, it's great to see comments on a shot or sequence only a few hours after broadcast.

If you missed it, you can still watch the final episode here.

Controversial gangster saga, Underbelly returns to Australian (and hopefully Melbourne) screens in early 2009 as 'A Tale of Two Cities'.
This prequel of sorts is set in the late-70's/early-80's and we've just completed the new HD opening titles for the series.
As the network wanted to pretty much keep the titles the same as the first series, so we ended up creating a 'retro' version of the our original sequence. The structure, edit and overall style is practically the same, due to the music also being brought over from the first title too, but with a more 'super-8' treatment to the imagery. The Underbelly branding we developed for series 1 has also been carried over.
The show is scheduled to air in early 2009 on Nine. 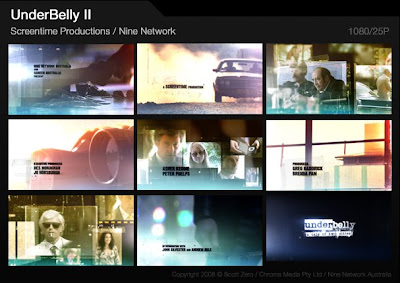