Bed of Roses is a bitter sweet drama staring Kerry Armstrong that's coming to the ABC later this year.

We've worked with Ruby Productions (Stephen Luby & Mark Ruse) before on Let Loose Live and a few other projects over the years, but when asked to design the opening titles for 'Bed of Roses', it required something a little softer and more feminine than what we have done in the past. It's great to be working with the guys again and, vicariously, with Kerry who we worked with on One Perfect Day.
Produced entirely using illustrated elements placed in a 3D environment, the idea was to create a single move through a soft and feminine landscape akin to a living Chinese printed fabric - it contains a lot of subtle visual clues that tie in with the core themes of the show, using the simple device of thorns (that look like Chinese dragons) evolving into a sea of roses - creating the notion of personal growth, the strength of family and the positive changes that can result from tragedy and displacement.
The palette is very muted and was effected to create a slightly dirty quality to the soft visuals, this is also reflected in the typography and main title card which are done in a rustic treatment to better connect with the riches-to-rags narrative and prevent the whole thing from looking too 'girly'.
It was also fun to do as it's rare and refreshing for a drama on Australian television to not contain images of the cast or locale (or the dreaded 'montage of footage'). It shows confidence and shifts the audience's perceptions of production value - presenting a more international, mature style. So props to the guys at Ruby and the ABC.
The hi-def titles are now complete and perfectly complement Niko Schnable's beautifully reworked version of 'Bed of Nails'. 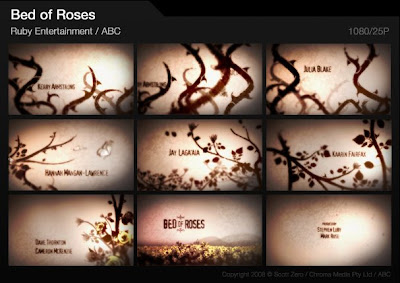 The directorial debut of comedian Bob Franklin, Corrections (produced by Incendia) is a short film set in a cosmetic surgery waiting room and stars Brooke Satchel, Roz Hammond and Jo Stanley. This tense little 10 minute piece was shot in HD by Marty Smith, edited by Dave Redman at Resolution Independent, with me pitching in with opening titles and grading duty.
Be sure to keep an eye out for it at a festival near you.
___________________________________________ CHROMAMEDIA
> film, grading, short, titles

This stylish and gritty miniseries, produced by Screentime, covers the true accounts of Melbourne's most notorious crime syndicate during the 90's and the cops who tracked them down. Chroma produced the HD opening titles (featuring music by Truman Show composer, Gerhard Berkhard), graphics package and branding. Several VFX shots were also produced for the show, mainly removal/additions and some tricky squib/rig removal. 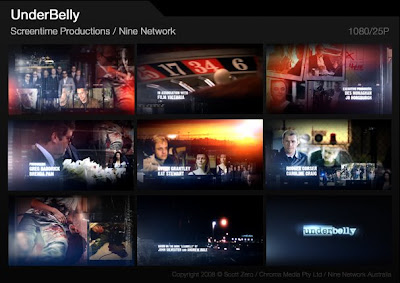